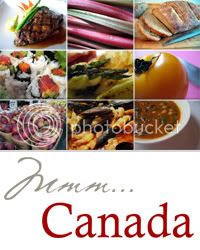 Earlier this month Jennifer and I issued a challenge to the foodblogging (and foodblog reading) world. We want to know what Canada tastes like to you. She's interested in all things sweet and I'm interested in the savoury side of life

In my entry for Jennifer's event, I stated that I think Canadian cuisine (savoury or sweet) developed through adapting family and cultural dishes using a mixture of indigenous and introduced foods. For that post, I made spiced blueberry-maple syrup that combined indigenous ingredients (maple syrup and wild blueberries) along with introduced flavours (cinnamon and black pepper).

For my own event, I'm keeping within that theme and expanding it a teeny bit.

In May a good friend of mine left a box of wild bounty she collected from her properties for me. My, those were some lovely looking ramps.

My idea was quite simple: work with flavours that play well together to bring out their oniony-garlicky best. Essentially what I think of as the basic tenet of cooking (Canadian or otherwise)-- simple homey cooking that's unfettered by fashion that uses what's easily available in a tasty way that's not only soothing but also makes you glad you're home.

In researching the various rampy treats, I came across a a recipe for a savoury ramp strudel. With a few tweaks (aided by a bit of a stromboli fascination), I decided to make savoury, swirly buns, using bacon, cheese and mushrooms. It sounds like a lot of elements, but really, it isn't. Plus, it combines those ingredients in a way I think of as Canadian in substance and spirit:

Again, this is a recipe that really doesn't need one. Okay...the bun part does. If you don't have a recipe you like, I made mine based on Edna Staebler's Neil's Harbour White Bread (and I used one-third the recipe).

Make the dough. During the first rise, fry the bacon until crisp and evacuate the bits to a bowl, leaving the fat in the pan. Fry the ramps and the mushrooms in the fat--add some oil if you need to. Season with salt, pepper and thyme. Reintroduce the bacon to pan and give it all a good stir. Remove contents to a bowl and set aside.

After the dough has doubled, role it out to a 24x30 cm (8"x12") rectangle. Smear with cream cheese and spread the rampy-baconny-mushroomy topping over the cheese. Roll the sheet up, so you have a 30-ish cm log. Slice in 12 rolls and place in a baking tin. Brush with beaten egg and sprinkle with Parmesan cheese. Let rise until doubled in size. 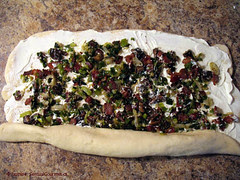 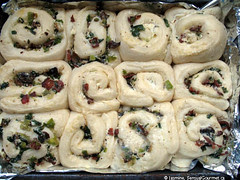 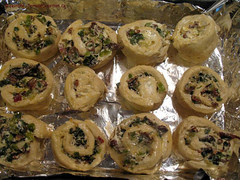 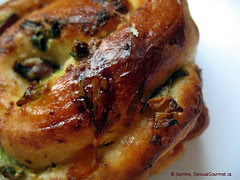 Those look great! Mmmm bacon...
I'm hoping to have my entry up today or tomorrow for you!

This looks awfully good, Jasmine! (Although, I'm not absolutely wild about ramps. I think their flavour is just a little too funky) However, I'd love to try this with leeks. And creamy goat's cheese instead of cream cheese....

Oh my gosh! I forgot to send you the stromboli recipe ... eek! Nevertheless, you seem to have adapted more than wonderfully well.

Oh that bread is heavenly. Sorry I couldnt be a participant this month. Im just enjoying being a voyeur.

If it weren't so hot here I'd try that today, but it's 38° and we are surviving on water, green tea and popsicles!

These look fabulous! I'll be passing along to all the wild leek fans in our family. The local schoolchildren once raided the leek patch on their way to the one-room school nearby; they're practically their own food group in this part of the world. The ramps are maturing among the maple trees just as we take down the sap buckets for the season. Quintessentially Canadian, wouldn't you say?

That looks amazing. I have never seen a savoury roll like that before. You are so creative.

Glad you like this...it's quite simple and you can do what you will with the filling. Elizabeth--goat cheese sounds fabulous.