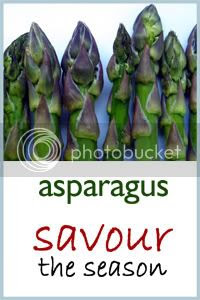 Back in February 2007 I began what I had hoped to be an ongoing series entitled "Savour the Season." Basically, what I wanted to do was focus on seasonal eating in Ontario. I planned to research that month's ingredient--a bit of botany, a bit of history, a bit of mythology--then share what I learned. I got two posts in (one about globe onions and one about parsnips) and began researching a third, but my studies over took me and then I needed to take my break.

Now that I'm back, and happily studies-free, I'm bringing back Savour the Season...just a little differently than first intended.

Even though research is one of my favourite parts about writing about food (there's just something about reading about food migration and how home cooks have changed how they prepare an ingredient that appeals to my geeky side), sometimes I just don't have the time to pore over books and sift through (and evaluate) web pages. So, rather than give up on the entire series, I'll start identifying seasonal ingredients as such and post the "bookish bits" as and when they happen.

Gosh, that was a long-winded introduction...

When I was younger I really didn't like asparagus. The only times I remember having it was when I'd attend swanky-ish dinners, and the chef would boil the living daylights out of them. On my plate would lie flaccid, waterlogged spears. I'd cut a bit off eat it and then, pretend they didn't exist while my attention turned to its platemates.

Since then, I've developed two theories about food:

When it comes to asparagus, I've learned that I prefer spindly spears to those that rival my vacuum's pipe. I also have learned that the only way I really, really like them is roasted. I've tried them boiled, steamed, in soups and in risotto. Roasting wins hands down. 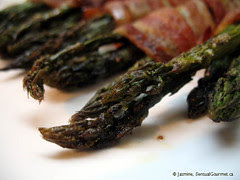 I can't remember when I first tried roasted asparagus spears. They were prepared really simply: tossed in a bit of olive oil and then liberally seasoned with salt and pepper. Wow. They were good. Asparagus went off the "politely nibbled on" list to being the recipient of my Ms Pacman impression.

Add this revelation to trying them roasted and wrapped in pancetta...and I was in springtime bliss. So when this year's asparagus crop started appearing at the bigscarymegamart, I knew what I'd be doing...

Out came the rashers of streaky bacon from the freezer, to bundle up four or so spears, depending upon their thicknesses. I drizzled them with olive oil and sprinkled them liberally with salt and pepper before popping them into a 180C/350F oven, until done.

I took some into work for lunch the next day and some of my workmates wondered which cafeteria station served them up...I suppose I should stop teasing them in that way...especially when I reheat them on the stoneware dinner plates...

Email ThisBlogThis!Share to TwitterShare to FacebookShare to Pinterest
Labels: Asparagus, Savour the Season

An idea borrowed from my dear friend, Antipo. Trickle over olive oil, s & p and roast, then drizzle with fresh lime juice. Serve with all the juices and some yummy bread to mop up every last bit of liquid.
Huggles

I love them roasted also, will have to get some bacon to try them this way :) oh, and I agree that bacon makes almost anything taste better!

My favourite way to have asparagus is steamed (but just enough so the spears are still al dente) and then drizzled with butter and fresh lemon juice. Hollandaise sauce is also highly acceptable accompaniment. (snork)

Tonight, however, we are having them stir-fried with ginger and soy sauce (copying a version of asparagus we used to get at Young Thailand).

But now we are going to have to try asparagus with olive oil and lime juice! And of course, another batch will have to be with bacon... (I love asparagus season!)

P.S. I too loathed asparagus as a child. I blame it on overcooking.