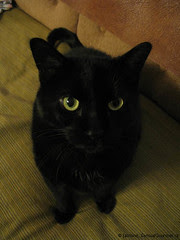 Long time Cardamom Addict readers know this handsome boy to the left--this is, of course, Mr. Bean.  If you follow my @cardamomaddict Twitter account, you know things have been rough for this dear old cat these past few weeks.  Unfortunately, one week after being diagnosed with both liver and pancreatic cancers, this lovely boy passed away.

Mr. Bean (Beanie to those who knew and fed him best) was a regular presence here posting his own views of the world and his food dish, occasionally explaining my absences.  He was a fun-loving big boy with a bigger personality than his generous frame betrayed.

Beanie was born under a wheelchair ramp across from the exbf's store.  This pitch black kitten was full of spunk and won admirers at moment one.  His first home was with the exbf's neighbours but they brought him back because...erm...he terrified their dog.  No, I don't quite understand what happened, but all I know the little kitten literally scared the pee out of their dog.

I brought him to mine as I knew My Dear Little Cardamummy always admired black cats. It was love at first sight.  We had just plucked Zeus and Hagia from our garden and given away their littermate Scutterbotch.  Zeus instantly attached to My Big Strong Cardapoppy and Hagia decided I was the best thing since sock drawer organizers, this little black kitten with the teeny patch of white on his chest, soulful green eyes and long tail (affectionately known as the flagpole tail, as it was always in "happy position," soon attached himself to Mum--for the past 17.5yrs he did everything he could to be by her side.

Over the years he, like his two adopted siblings, became a foodish cat.  But unlike Zeus and Hagia,  who preferred a select number of "people foods," Bean simply loved food and developed a taste for a wide variety of flavourful dishes.  Poached chicken or a simply roasted joint would elicit a "why are you being so mean to me" look. Long-cooked and deliberately spiced foods were what he wanted--coriander chicken, beef and pork curries--although he wouldn't say no to bacon, oatmeal or a bit of meatloaf.  By far chicken was his favourite and would let out a special "chicken miao" and danced frantically whenever some was brought into the house (raw or cooked).

Unfortunately, Beanie's legendary appetite became quite fickle in the past few weeks, and although his blood work was fine, Xrays and an ultrasound showed different.

His final days were spent with me, as my parents are away.  He adjusted to his unfamiliar surroundings--a different house and two two strange kittens, along with familiar humans.  Mum gave me instructions to make his favourite foods and pick up his favourite junk food (KFC...yes, really).  So this week, I made my own versions of mum's coriander chicken and beef curry, as well as my own ribs.  He happily nibbled what he could.  When he could no longer have solid food, I warmed thick cream sweetened with honey or melted ice cream for him to lap up. When he could no longer do that, he seemed to be content following the aromas that came from my kitchen.

He spent his last night on my couch, snuggled up against me, purring. If it were up to him, he'd still be here, but his liver had other plans.  On Wednesday, I called Mum, so she could say goodbye.  I set the handset on the floor, next to the still majestic, but very tired cat.  Bean responded to his mama's voice, pulling the receiver closer to him and cuddling it as she promised to be home soon.

Beanie passed away on Friday, snuggled in a warm towel, on his way to Dr. Bonnie's.

Bean was loved and liked by many (including by those who read Cardamom Addict).  He was warm and dry with soft cushions on which to sleep, windows that let him safely watch the world and, of course, an amazing home cook who was always willing to share.  Goodnight, Beanie Boy.  Sleep well.