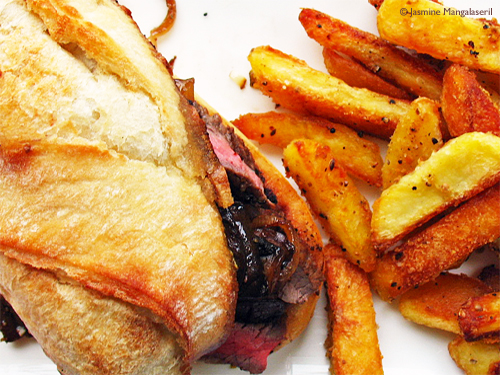 How do we know it's Blue Monday?  Because someone quantified it.

Look!  It has a greater than symbol!  Look!  There are uppercase and lowercase letters above *AND* below a line!  Look! There are even brackets and letters to the power of other letters!

It looks mathy and sciencey so it must be true!

Of course just as someone quantified depression to a single day, someone else has published their own study indicating comfort food is a myth.

Why don't these justification-through-quantification types use their (ahem) immense smartitude for good, as opposed playing to sunlight-deprivation and emotional stunting?  Maybe they read 1984 and thought Ingsoc was the key to Utopia.  Maybe they watched Another Brick in the Wall's conveyor belt scene and thought we should all be faceless (and docile) automatons.

It all seems to be about more Sheldon and less Penny.

Kinda makes you feel all warm and fuzzy inside, doesn't it?

For those of us who have bad days and whose blue days aren't triggered by a convergence of nonsensical numbers gussied up in the name of science, the occasional wallow in happy memory triggers can make things seem better. For some people it's solitude and an aptly-chosen record, for others it's a night with a best friend and a movie with a favourite actor, and for others, it's food.

The lovely thing about comfort food is how individual it is to the person.  While many think of tomato soup with a grilled cheese sandwich as comforting, not everyone thinks of the same soup recipe (or tin), and the sandwich may be on different breads, different types of cheese, and there may be other things tucked in with the cheese--onions, bacon, avocado.

For me, often the effects of a bad day (not a horrendous day, but one bad enough for me to come home in a funk) can often be numbed by beef and potatoes.

I feel rather odd about offering a recipe for this as it's something I just pull together, based on what I have, or what I can find.  Here's what I did for the sandwich photographed: 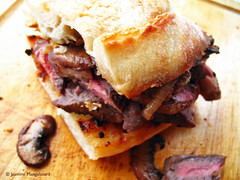 For the sandwich
Sprinkle Schwartz's Montreal Steak Spice on the steak (for about $5, my butcher had a lovely sirloin medallion).  Let sit in the fridge until you're ready to eat.

Sauté  mushrooms and onions with salt, pepper, thyme and a splash of balsamic.

Pat the steak dry with a kitchen paper and fry in a hot pan until it's done to whatever point makes you happy.  Remove from pan and set on a minced garlic clove.  Tent the steak with tin foil and let sit for about 10 minutes.

Cut the mini-baguette in half and set the cut sides in the steak pan, to sop up the fats and juices.  Slather one half with English mustard.

For the Chips
By chips, I mean chunky fries.  Jamie Oliver has a technique that's pretty close to mine, but instead of sprinkling with rosemary after they've cooked, I toss the chips in an oil and steak spice before roasting.


The Sheldons of the world will need precise measurements--weights and volumes, temperatures and times, and will whiteboard an arcane argument pointing out why what I've posted is just wrong.  The Pennys of the world will make (or get) a sandwich (like or unlike this one) and eat it, with or without chips, while listening to New Order. 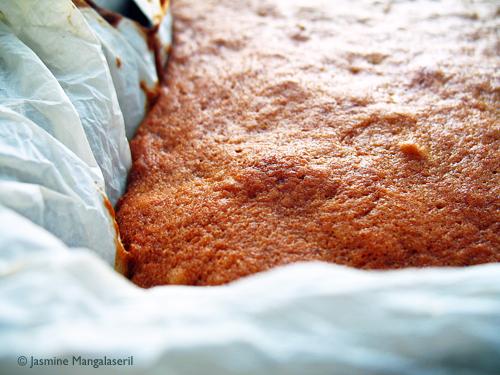 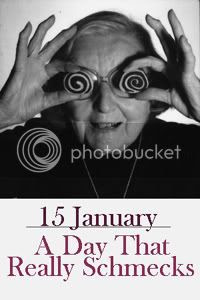 Happy birthday to my friend, Edna Staebler. This Canadian culinary gem would have been 109 years young today. She was a marvel and a talented woman who wrote about life, but is best known for bringing Waterloo County fare to the world.  I've written about her several times, including  here, here and here.

Even though 1 January marks the new calendar year, 15 January starts my culinary year: The holidays' excesses have lulled, the fridge is now rid of overcomplicated and overzhuzhed memories.  Overreaching and overhyped wannabe food personalities are hushed.  It's time to return to what sustains me for the other 350 days of the year--delicious yet simple foods, born of tradition, seasonality and curiosity.

This January sees a surfeit of bananas in my house--more freckled yellow fruit than I care to mention are in bowls and on my countertop, thanks to my parents.  Don't ask.  Things like this just happen.

While banana'd treats are a temporary staple--banana smoothies, and peanut butter, banana and honey sandwiches--I still feel up to my knees in bananas.  I could take Josephine Baker's lead and make a fashion statement, but I don't.

Edna offers several delicious-looking banana baking options, but this simple banana cake from her first book, Food That Really Schmecks, caught my eye.  As with all of her recipes, this one is easy, tasty and came together quickly.  I've made some minor changes: instead of shortening, I used butter with a splash of oil, and I substituted sour cream and milk for sour milk.

The end result is a tender-crumbed, old-fashioned cake, devoid of propensity but filled with comfort and flavour.

This cake can be made in a rectangular pan or in two round tins, sandwiching a slathering of whipped cream and sliced bananas between layers.  Edna recommends a penuche icing--which I'm sure would be scrumptious--but I think unadorned is best. 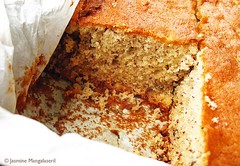 Prepare a 33cmx23cmx5cm (13"x9"x2") pan by either lining it with crumpled greaseproof paper or by greasing and flouring.

Sift together the flour and leavening agents. Set aside.

Mix together the sour cream, milk and mashed bananas. Set aside

Fold in the nuts and give the batter a good stir to ensure no flour clumps are hiding. The batter should be light and thick but moussy texture.

Pour into the prepared pan, level the batter and smooth the top. Tap on the counter once or twice to release any large air bubbles.

Bake for 40-45 minutes. The cake should be golden brown, the top springs back when lightly touched, and the cake pulls away from the sides. An inserted bamboo skewer should come out cleanly.

Posted by jasmine at Thursday, January 15, 2015 No comments:

...my tummy remembered the wonderful foods that made it so happy this season 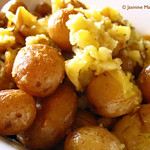 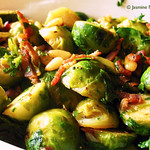 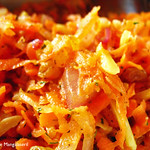 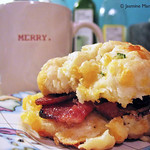 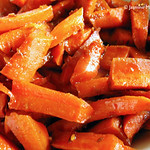 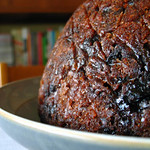 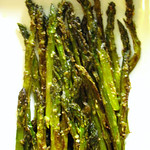 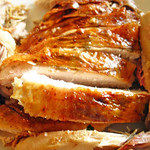 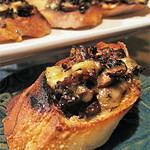 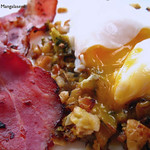 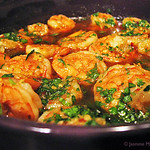 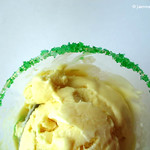