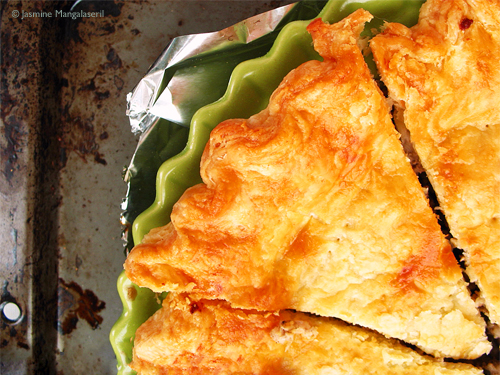 Given this year is a special pi year (if you don't know, look at the number below and you'll see it), it only made sense to join in this roundly delicious celebration.

How better to celebrate 3.141592653 (et cetera) in the land of math and physics geniuses than with a very Canadian pie? I thought of butter tarts (which are just little pies), flapper pie and bumbleberry pie but I wanted something savoury. To my mind, the quintessential Canadian savoury pie is “tourtière,” the Quebecois meat pie, traditionally eaten over the Christmas-New Year season.

Regional variations mean it’s difficult to declare an “authentic tourtière.” General agreement among Quebeckers seems to end with the point that tourtières are double-crusted savoury pies.  The pies can be:

So why do I think tourtière is quintessentially Canadian?

Click here to listen to Bergeron and Armstrong talk tourtières on the CBC.

This straightforward recipe is very much like the first tourtière I tried -- a rich ground pork pie and lightly spiced.  Served with a dollop of HP sauce, buttery peas and creamy mash, it makes a delicious winter's meal.  And that's not an irrational declaration. 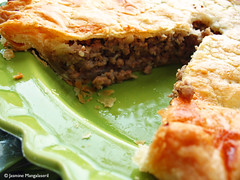 Tourtière
Adapted from a recipe by Julian Armstrong

In a heavy bottomed pan, combine water with pork and bring to a boil.

Add onion, celery, herbs and spices (except for salt).  Cover and cook over a medium-low flame for about 30 minutes, stirring often.  Add more water, if the mixture begins to dry.

Taste the mixture, and add salt, to taste. Stir in the oats, cover and continue to cook (still stirring often). Remove bay leaf and let the mixture cool.

Line the pie tin with pastry.  Evenly spread the filling in the lined tin, brushing the edge with egg. Cover the pie with the top crust, seal the edge.  Trim and crimp.  Cut steam vents, in the usual way, and brush the surface with egg wash.

Reduce heat to 180C/375F and continue to bake until the crust is golden (approximately 25-35 minutes).

Cool slightly (about 10-15 minutes) before slicing.

To help cut the richness, serve with something sharp such as