#lovesochi in a Florentine swirl of red and white 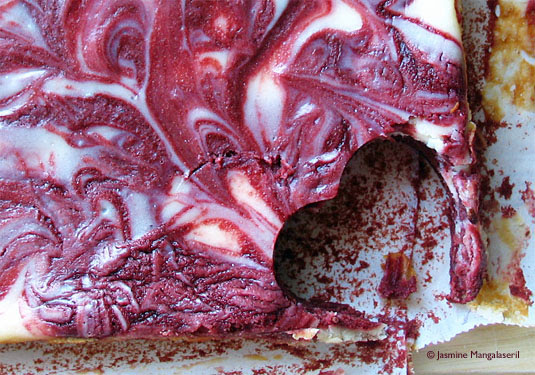 A few days ago David Jones tweeted looking for support for Toronto Pride's #lovesochi campaign.  The ask was simple, tweet a picture of your hands making a heart shape and tweet it with the #lovesochi hashtag and a message of support to Russia's LGBTQ community.

For me, it's a no-brainer, and I was happy to tweet.  I have a lot of friends and colleagues who are gay, so I'm privy to some of the issues they've encountered.  I've been privileged to be one of the first, if not the first person someone's come out to, so I've seen and heard the relief when they've not been rejected because of their  preferences.  Really, beyond all of this, to me and a number of others, it's a human rights issue.

I fully admit not everyone shares my view (as is evidenced by Russia's anti-gay propaganda laws, as well as fights for same sex marriages and benefits), so I knew by participating in the campaign, I could open myself up to unkind messages.  Which isn't new: I'm an articulate and informed woman on Social Media, who isn't easily swayed by right-leaning bafflegab.

Would my latest "fan" be more disappointed to find out that he's not man enough for me (or any of my hot women friends…or hot men friends...now that I'm thinking of it, I do have a lot of hot friends), or that I am not a lesbian? Not that I'd tell him: I have enough issues with amorous online sillybillies who are attracted to the fact that I'm an articulate and informed woman on Social Media, who isn't easily swayed by right-leaning bafflegab.

And I know there's a chance by posting this here, I may attract more trolls.  It's a risk I take because not voicing my support is a risk I'm not willing to take.

My hands frame a gorgeous Florentine swirl of red and white, the top layer of a freshly baked tin of Red Velvet Swirl Brownies.  The maroon brownie layer is chocolatey, with the right amount of chew, and unlike many other red velvet cakes, there's little of the telltale bitterness half a bottle of red dye usually leaves. The silky cream cheese topping is a balance between sweet and tart with a hint of cocoa from the dolloped and swirled brownie batter.  Gorgeous, simple and tasty, I followed this Food Network Recipe almost to the letter, but not quite. 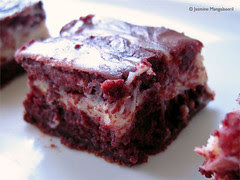 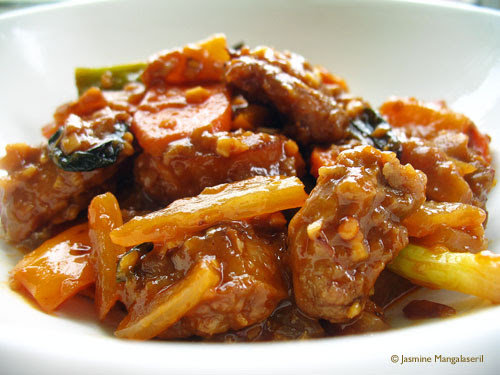 Sometimes when I crave a food, I don't crave a "good" or "authentic" version of it.

If I want a good burger, I make it myself using meat (or patties) from my butcher, and nestle it in a bun with crumbled Stilton, onions I've caramelised for the better part of an hour, garlicky sauteed mushrooms and a Dijony-mayonaissey spread. That said, from time to time I want the distinct industrialised flavour and greasiness that can only be satisfied by a trip to one of those ubiquitous multinationals that pride themselves on consistency of product, units sold and "community impact" through donations and sponsorships.

No, it doesn't really make a lot of sense, but then my gullet is an equal-opportunity foodish place.

This week I wanted Chinese food.  Not the good stuff--the food made by kitchens trying recreate dishes from particular provinces, with subtle but sometimes complex flavours--but the not-so-good stuff.  Not what I consider "Canadianised Chinese food"-- a half-hearted nod to the land of the dragon, blandly spiced, ladened with as much MSG as it is with green bell peppers, but in a place that lies somewhere in between.

Very specifically I wanted sweet and sour chicken.  Something a step or two above what's available in food courts and many Canadian-Chinese restos.  Although there's nothing wrong with jolly puffball chicken nuggets, bronzed in a deep fat fryer and swimming in that sauce (cloying and puckering, and coloured an orange that brings to mind nuclear radiation), I think I can do without bobbing battered bird bits.

I flicked through a number of recipes and hovered over dishes as disparate as Gung Bao Chicken and General Tso Chicken and Sweet and Sour Pineapple Chicken.  Between several web pages and several tomes in my library, I came up with this version.

It's quite a simple recipe (although the ingredients list may turn off those accustomed to lists containing fewer ingredients than they can scan in the 12 items or fewer checkout.  Sweet veggies--carrots, bell peppers and onions--and seared chicken chunks bathed in a sweet and sour sauce. Yes, there's an orange sauce--not the 1970s disco as what I'm used to, but there's a suggestion of garishness that I'd expect from such a dish.

So while this dish probably won't ring in the Year of the Horse in many homes, it did in mine.  And although the new lunar year is a day or so old, it is off to a galloping start.


Recipe in progress: Sweet and Sour Ginger-Pineapple Chicken
Serves 4-6
Ingredients
450g/1lb boneless chicken, dark & white meat, cut into 2cm (0.75") cubes
Marinade:
1Tbsp/15ml cornflour
2Tbsp/30ml all purpose flour
60ml/0.25c light soy sauce
Peanut oil for frying
2-3 dried chillies
1 medium onion, chopped into 2cm (0.75") pieces
1 yellow or red bell pepper, chopped into 2cm (0.75") pieces
1 carrot, sliced into 5mm (0.25") thick discs
4 green onions, cut into 5cm (2") lengths (green & whites)
Sauce:
1Tbsp/15ml minced ginger
1tsp/5ml minced garlic
80ml/0.33c chicken broth
80ml/0.33c tomato ketchup
2Tbsp/30ml dark soy sauce
2Tbsp/30ml white vinegar
1Tbsp/15ml honey
125ml/0.5c pineapple juice
250ml/1c pineapple tidbits
Garnish (optional)
toasted chopped cashews
Method
Mix marinade ingredients with chicken and let sit for 10-15minutes.
Heat oil until shimmering and brown meat in batches. Don't worry about cooking the pieces all the way through, you're just looking to colour the meat. Remove from pan.
Wipe out the pan, and add a bit more oil. Again, when it shimmers, add the chillies and stir for about 30 seconds. Add the carrots and bell peppers and stir fry for about 3 minutes. Add onions and fry for 2 minutes. Add green onions and stir fry for another 1-2 minutes. Remove from pan.
Slick the pan one last time and add the ginger and garlic and stir until fragrant. Add the broth, ketchup, soy sauce, vinegar, honey and pineapple juice. Stir well and bring up to the boil. Reduce by about a quarter and add the chicken and its juices. Stir so the meat is coated and let the sauce reduce to about half. Stir in pineapple.  Balance flavours to taste.
Add vegetables long enough to heat through.
Serve over rice or mix in with noodles and garnish with nuts.
cheers!
jasmine
I'm a quill for hire!

Posted by jasmine at Saturday, February 01, 2014 No comments: