Time to make the doughnuts: Dutchies 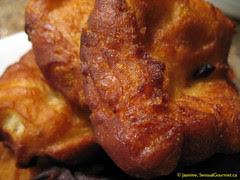 When I deduced that Tartelette and Peabody devised a divine doughnutty doo declared "Time to make the doughnuts" I knew I'd be getting out the big vat-o-oil for this one.

With so many flavours and types out there, narrowing down my entry was pretty easy: the Dutchie.

"Dutchie?" I hear some of you say. "What on Earth are you talking about?" (Okay, others are saying, "Oh man, couldn't you do something good?" while others are leaping about for joy (yeah, I hear the little thuddy sounds)).

To me, the Dutchie is the quintessential Canadian doughnut. And trust me, Canadians know doughnuts. According to this CBC article, there are more doughnut shops per capita here than anywhere else on our big blue marble, and we eat more doughnuts than anyone else in the world (that and, apparently, KD).

Available at pretty much every Tim Hortons (but the one in my office), these sultana-studded pillows of sugary-glazed, yeast-risen goodness seem to have as many fans as detractors...is it the coffee shop's embodiment of our two solitudes? Peut-être...but it has nothing to do with our national soul-searching, culture-defining, language-determining passtime...In my opinion, it has everything to do with freshness.

Enter any hockey area at 6am (or earlier) and you'll see a gaggle of parents, clutching their double-doubles, munching away on Dutchies watching their kids practice. Walk into a Timmy's and you'll see a number of women conversing and cajolling over coffee and their Dutchies. Head off to the office and you'll see the guys gravitate to the still-warm deep fried squares of dough-covered raisins. These, I think, are those in the pro-Dutchie contingent. People who happen to get their treats freshly made, retaining a bit of oven warmth.

The anti-Dutchie group seem to centre on two issues. The first is raisins: people either like them or they don't (not sure if I've ever met anyone who's indifferent to the wrinkled beasts). So, if you don't like raisins, you probably won't like Dutchies. The other point is their peculiar ability to go stale faster than any other of Tim's doughnutty offerings (ring, twists, fritters or Timbits); unless you see someone put them on display racks or if they still have their "just made" tag, chances are the glaze has dried and begun to flake off and the doughnut itself may be better used as the puck at those 6am practices.

Why are they called Dutchies? I don't know--and Tim's won't tell me. I sent them a very polite email asking for non-nutrient info on these treats, which they've promptly ignored. (Edit: They've since replied.) My theory is they are based on the Dutch oliebollen...but who really wants to eat something that sounds vaguely like "oily ball" so in true pocket-riffling, while wearing rubber gloves style, these fried cakes were monickered "Dutchies." (If someone really knows why they are called Dutchies, please let me know and I'll amend this post...or post your theory...and no "they were originally made from Dutch people" is not an acceptable response, sorry JDN.)

Unlike most doughnuts, Dutchies aren't ring doughnuts or twists--they are squares or rectangles, made from a yeast-risen dough, sprinkled with raisins. I want to say the Dutchies of my childhood were glazed in honey, but now seem to be glazed in a simple syrup. If anything, they are reminicent of a blueberry fritter-sans blueberries. Most I've seen are uncomfortably large and more filling than I'd like. If I have one, I usually split it into two or three and save the rest for later. Microwaving helps diminish the staleness a bit.

I searched for an appropriate recipe to try, but I couldn't find one. I looked at several oliebollen, olykoek and beignet recipes in attempts to figure out my own variant, but in the end, I decided to base the recipe on my dear friend Edna Staebler's Kucha recipe from Food That Really Schmecks.

In her fat cakes section, she recommened using plain kucha dough for yeast doughnuts (you can simply roll the dough out and form it into little buns and bake them at about 180-200C (350-400F) until done). Edna's never steered me wrong, so I followed her advice and used the plain kucha as the base, adding the sultanas, spicing and honey-water glazing to transform them into Dutchies. Sprinkle the yeast into the warm milk, then add the butter, sugar, salt and zest and stir well. Add the egg and spices. Stir in enough flour so the dough holds together, but is still tacky. Be careful to not add so much flour that the dough is stiff-- if after you've added all the flour the dough still seems too loose and tacky, bundle it up and let it firm in the fridge for about 20 minutes. Take out your frustrations on the dough for about 15 minutes before letting it double in size in a warm place--anywhere from one to two hours.

After the dough has risen, punch it down and add the drained sultanas and knead again to distribute the fruit. Roll out to 1cm thickness and cut to 5cm squares. Place the squares on a lightly floured surface and let them rise again, until they've doubled in size.

Fry in hot oil until golden and blot on paper towels, then glaze with honey-water.

Related Post: Pass the Dutchie on the left hand side

The first time my Canadian husband took me to a Tim Horton's, he insisted I try a Dutchie. That's all it took -- one taste -- and I was hooked. Here at home he's addicted to Dunkin Donuts, but as soon as we come north and cross the border, he's back at Timmy's for a Dutchie.

Looks really good. Love your photos! It's a good thing I like raisins. How can anyone resist these because of raisins. Sounds like their missing out. ;-) Interesting about the oillbollen (sorry about the spelling) connection.

Thank you for your entry! They are gorgeous! I remember eating Dutchies while visiting my cousin in Canada! I am sure Edna knew her Dutchies even without knowing the origin...I'll have to try them soon!

Uhm... seems to me what you have there is a look-a-like recipe for Dutch oliebollen... only difference is that we scoop our dough (more liquid) and fry into puffy balls of goodness.
Origin of the name? Mm, think it stems from the old Medieval word "Diets" which was then used for the Dutch language or sometimes -wrongly- even "Deutsch" (= German). (As in Pennsylvania Dutch which is really German... this is getting complicated =:0)

Maybe the immigration of Dutch people to Canada after 2nd WW brought the name and the pastry to Canada?

More than you were probably looking for..sorry! I would love to have one of your fresh Dutchies now!

Well, Jasmine I am not fond of raisins but reading along I kept thinking blueberries. But I guess they wouldn't be Dutchies with blueberries.
Yours look super good and maybe a Dutchy would convert me.

I have never heard of Dutchies before, but they sound delicious!

I used to not like raisins in any sort of baked good or pastry, but then I crossed over to the good side and now I do!

Oh my gosh! These look amazing! Can't wait to try them.

oooh these sounds so good, I can't wait to try them!

Next time I get to Canada, I'm going to try one of these! The raisins cancel out all the fat!

These look lovely! Dutchies are hands down my favorite doughnut.

I remember when I was in Toronto having an awesome cup of cappuccino at Tim Horton's, but I never tried the dutchie. I must go back again.

I must have never had a really fresh dutchie from Tim's as I never really understood the appeal of them. Not when there were extra fresh apple fritters right next to them!
Got to admit, yours looks very good and I bet they tasted amazing hot and fresh!

These look terrific - and I agree that "Dutchies" sounds sooo much more palatable than "oily ball" ;)

Glad you approve of my take on the Dutchie! Still trying to find out more on its origins--should I ever find it, I'll do up another post..

One possible etymology, if the word is actually old and not a creation of Horton's themselves: cast-iron Dutch ovens were the original deep fryer. It's not a big leap from there to name a cake fried in one a "Dutchie".

Glad for the recipe!! I just came back from Toronto a couple days ago and I must say that all I could think about on the way there & back home was getting to a Timmie's and ordering a double-double and a dutchie. I ate way too many (will have to take up jogging :)but it's well worth it.

Just got back from a convention in Toronto where I had a cup of piping hot Tim Horton's coffee and a yummy warm Dutchie every morning! I'm really missing them, so thanks for the recipe! I know that there are some "Timmy's" back in the eastern US, but sure wish they would open stores out here in California. We don't even have Dunkin' Donuts out here, just some Winchell's (not nearly as good!)in SoCal and the other donut shops are mom & pop operations so there really wouldn't be much competition.

I was so happy when I stumbled upon this blog, I was just talking with my mother a few days ago about trying to make Dutchies (as I inhaled the timbit version...thank goodness Im 10 minutes away from 3 tim hortons :P)
Also while googling my face off for Dutchie recipes to try I came across a tidbit about the history of its name - http://www.wallaceburgcourierpress.com/2011/12/12/popular-doughnut-has-local-history