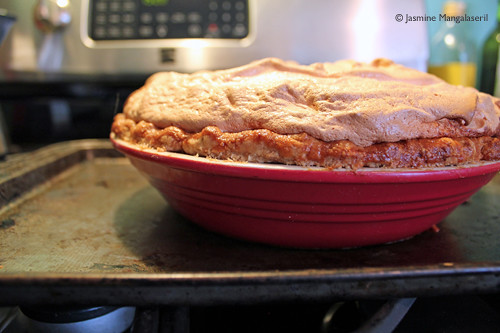 It embodied all that was wrong my Blue Monday Weekend.  The gawds decided to bat me, my friends and my family around as a cat bats around a paper crumply.  It seemed as if with every BBM bing, every corner I turned, every chair I sat in, every call I took, something happened that would test the patience of Job. I think (I hope) that spate is now over, and we've been flung to safety underneath the cosmic chesterfield, far from the reach of outstretched fully-clawed paws.

I won't go into details, but if I were to declare those four days' key phrases, they would be:


That's when I decided to bake a pie.

I found a century-old custard pie recipe I'd never heard of and thought I'd give it a go.  It would have worked...if I were in a better mood.

After more than two hours in a 400F/200C oven, it was slooshier than a community college girl spending her OSAP loan on a Reading Week in Fort Lauderdale and wobblier than a basophobic-aquaphobic-acrophobic crossing the Kotmale Footbridge.

I don't recall how long that (deleted) pie was in the oven, but I decided to call it a day and plop the meringue on top when the now slightly more sober college girl was on the footbridge.

My Dear Little Cardamummy has always said she could taste my mood in my cooking.

The rest of my week went much better (still, there were some residual annoyances, but I think things are sort of on an even keel).  I remade the pie.  It was good.

The recipe will be posted later, but until then, I think I'll have a slice of pie.

*Not mine--according to the usual age my family (on both sides) kick the bucket, I'm not due for another four years.

Posted by jasmine at Saturday, January 23, 2016 No comments: