A few weeks ago I decided to start a series centring on seasonal eating. Once a month I'll highlight something that's in season, primarily based on Foodland Ontario's Seasonal Availability Guides. 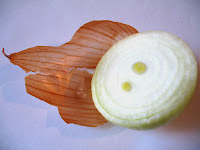 Savour the Season: February--Globe Onions.
Globe onions (or storage onions), those orbs enveloped in brown, papery skin, are as basic to cooking as salt, pepper, garlic and lemons. From casseroles to tarts and soups to bhaji to deep-fat-fried onion rings, these alliums imbue a sweet and savoury base from which to build up flavour and body. Onions can be eaten fresh, dried or cooked, and they can be used as an ingredient or a seasoning.

History
Onions (from ramps to globes) have been cultivated for more than 5000 years, originating from the Asian-Middle Eastern territories. Ancient Egyptians, Greeks and Romans ate them raw, but each culture thought considered them differently. These bulbs were both revered and tabooed by ancient Egyptians; Greeks thought onions harboured therapeutic values, and Romans (Apicus in particular) thought they were inconsequential, and thought of them as secondary flavourings in mixed dishes and dressings.

They were European kitchen staple by the Mediaeval Ages; Columbus introduced onions to the New World on his second voyage.

Etymology
“Onion,” has Latin roots, and is either a variant of unio (“single white pearl”), a white bulb or comes from the Latin term for one, oneness and unity.

Varieties
Onions are part of the lily family and related to chives, garlic, leeks and shallots. There are more than 500 onion species; approximately 20 are important edible varieties. They can range in size from a several grams to more than half a kilogram.

Experiencing
Onions are made of fleshy pallid leaves or scales that store energy and covered by several layers of papery skin. Its colour comes from Anthoxanthin, the same compound responsible for potatoes’ and cauliflowers’ creamy-yellowness.

The soft but pungent flavour is central to the onion’s appeal. We pick up on flavours that can range from appley, to bitter, to spicy and sharp and sulphury scents when we bite into a raw globe. Cooking moderates these qualities, and can transform these qualities into sweetness, with aromatic properties ideal for stocks and soups.

Complex sulphur compounds give onions their characteristic bite. Cell walls store sulphur drawn up from the soil. When the vegetable is cut, air is allowed in, and creates a pungent scent and eye irritant. Sulphur escapes the vegetable, and attacks nerve endings on the eyes and nose. The chemical breaks down into hydrogen sulphide, sulphur dioxide and sulphuric acid; heat inactivates these defence enzymes.

Keeping
Storage onions are grown in summer and harvested in autumn. Look for firm bulbs with thick skins. Pass on those with green or mouldy blemishes, have an odour or sprouts. Onions should be store in a cool, dry place—hard and dry onions can be kept for months.

Ways to stop crying
No guarantees, but here are some ideas that may help:
- Contacts or swimming goggles
- Peel under cold running water
- Chill the onion before cutting it
- Soak the onion in warm water and vinegar
- Rub hands in acidulated water to remove smell
- Reduce pungency by blanching them in boiling water
- Keep root end on when cutting
- Hold a piece of bread in your mouth when cutting

Email ThisBlogThis!Share to TwitterShare to FacebookShare to Pinterest
Labels: Onions, Savour the Season

Contact lens really to block out the eye irritant; I never had a tearing problem when I was wearing my contacts.
I've always marveled how anybody could bite into an onion as if it were an apple.

the best method i know of to keep from crying is to slice the onion, never "chop". Chopping released more of the oils into the air, which of course will get it to your eyes faster.

I'm so happy that you've followed through with this series, Jasmine!

What a great guide, Jasmine - I love the highlight.
I've had the best luck with the soaking onion in a mix of vinegar and water - this does unfortunately remove some of the pungent taste as well I find, but is good for some salads and sometimes fresh salsa.

I had no idea that Foodland Ontario had such a useful site. Thanks for pointing it out. (I had noticed that cooking onions were decidedly good these days though.)

Contacts totally work. I always laughed at my roommate when she chopped onions, and then one day I was cooking with my glasses on and started weeping like crazy!