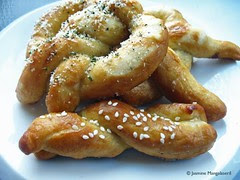 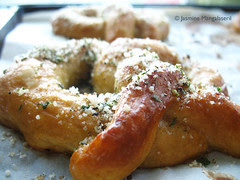 This is such a lovely tribute, Jasmine. I caught the tail end of your tweets the other night. They reminded me of something else that has changed so much. We actually used to converse in 140 characters there instead of just posting links to the next post. Ah well. Your Bakewell Tart was one of my favorite challenges. It was such a lovely dessert. Miss the old community so much!

What a lovely post. Sometimes I can barely remember back to those days. It's sad but all the more reason for us to stay in touch and stay strong.

You are right, it was so much fun to find everyone's blogs on post days. I always enjoyed that part.

The blogging community has lost a very special lady. We all learned so much with a sense of style, humility and humour, always laughter and fun. We may no longer be Daring Bakers but we are still those fledgling bloggers in spirit who rose to every challenge. Thank you Lis. This was a lovely tribute. Good for you for making these pretzels. They are now on my bucket list.

So evocative, so beautiful Jasmine. Oh, the years that have passed. I often remember the cardamom addict...each time I reach out for cardamom {and that is often!!}. Much love!

G'day and what a lovely tribute to Liz, true!
It is bittersweet as am enjoying reading all the tributes, share one, but feel sad and glad at the same time too!
Cheers! Joanne
Great pretzels!