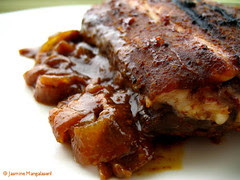 Give me a single, smart (verging on geeky), well-read, musical man who’s interested in politics, science and art and I simply swoon…I, unfortunately, collect men who would be better off with someone who will simply acquiesce to their officious, ill-informed prattle…or someone easily flattered when these men admit to researching conversation via Wikipedia. Really.

Yet there is one commonality amongst the men who like, love and would like to love me: ribs. An unreal weakness for saucy, juicy, spicy, sweet, tangy, meaty ribs.

Those who’ve tried my back ribs never seem to tire of them—Michael requested them weekly for several months; both he and the exbf chose them as birthday meals. Heck, even my father sent my Dear Little Cardamummy on a mission to find out what I did that made my ribs so much better than hers (that went over well, I can tell you).

I fully admit that my usual method leaves many rib aficionados cowering with horror: I boil rub-massaged slabs with an onion and a bay or two before giving them a lacquer-like sheen in the oven, courtesy of several brushings of barbecue sauce.

When a colleague told me of her slow cooker rib recipe, I was intrigued. Unlike other meat recipes, she didn’t have to pre-cook anything—simply dump and go. The fact they slowly blurbled away in cola before quickly painting them in sauce and tossing them on a grill won me over.

As a fan of Coca-cola ham, I know how tasty pork braised in cola can be. The fizzy drink’s mildly acidic qualities tenderizes meat; it’s caramelly clove-spiky flavour has a natural affinity with pork. In case you need yet another reason to avoid diet pop, I’ve read it works with any brand of cola, but only “regular” versions as diet versions can just ruin the dish.

I adapted this recipe as I wanted more flavour imparted into the meat during cooking, and mixed the cola with some of the barbecue sauce. The meat was tender-sweet and spicy. Grilling caramelised the sauce and left the ribs sticky and slightly smoky from the flecks of char. Needless to say, I was more than happy with my supper.

Quite honestly, after eight hours in the slow cooker, I couldn’t bring myself to toss the flavourful liquid or the cooked onions, so while the ribs were finishing on my stovetop grill, I simply tipped the liquid, onions and a spoon or two of barbecue sauce into a pot and reduced the liquid to a thick, burnished sauce that clung to the onions. A perfect accompaniment with the ribs or for later use as a topping for burgers or other hot sandwiches.

Barbecue sauces are as varied as the regions they come from. Teryaki and hoisin sauces are used on grilled meats in some Asian countries while Chimichurri is popular in South American countries such as Argentina, Bolivia and Uruguay. The US has several distinct regional sauces South Carolina mustard sauces and mayonnaise-based Alabama White sauces. My sauce has no true regional provenance, but combines Kansas City’s thick, sweet tomatoey sauce with a bit of Texan heat. 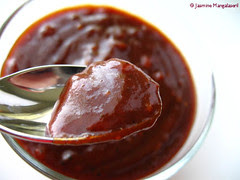 Soften the onions and garlic in the oil. Mix in the remaining ingredients and simmer for about 20 minutes. Let cool to room temp before using.


Cola has been used in cooking in the southern US for ages. Sweet, spiky and slightly acidic, it pairs well with pork and adds to the rib’s smoky-sweetness. Use your favourite shop-bought barbecue sauce or make your own. After spending most of the day on low in the slow cooker, the ribs will be succulent. Serve with a warm onion relish by simmering the braising liquid until thick with the cooked onions and some extra barbecue sauce. 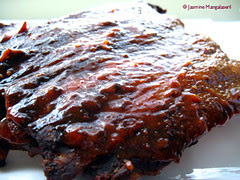 Remove silverskin and any excess fat from the ribs before slicing into ifour or five-rib mini-slab portions. Massage rub into the meat and let sit in the refrigerator for a few hours or overnight.

Mix the cola, half the barbecue sauce and liquid smoke together. Brush each of the slab sides with the sauce before spreading a couple of spoons’ worth of sauce on the bottom of the slow cooker. Layer some onions on top of the sauce, place a slab or two (depending upon the size of the cooker) over the onions, and then continue to layer the onions and the slabs. When done, pour the remaining sauce over top and set the cooker on low and cook for 6-8 hrs.

About 15 minutes before the the ribs are done. Heat up a grill pan or barbecue or oven (350F).

Brush the cooked ribs with plain barbecue sauce and grill each side for 8-10 minutes or roast in the oven for about 20-30 minutes. Serve with additional sauce for dipping, if you wish.

Here's my recipe for rib rub, but you can certainly use whichever recipe or brand you wish.

I've tried these ribs a couple of times, once with my homemade sauce and again with a commercial hickory sauce; and both worked well.

sounds really good! I think I will try your BBQ sauce, thanks for sharing it :)

That shot oif the BBQ is perfect and those ribs.... What can I say. Glad this cooker is working out. So now your Mom has to drag hers out. LOL.

Good to know the slow-cooker works for ribs, better than it did for chicken cacciatore. The description is making my mouth water!

I actually make ribs more or less the way you do: I simmer them in beer (with onion, bay, and ginger), then broil and glaze them. I can't really do them any other way, since I don't have a BBQ. I'm not complaining, though!

Those are some sexy ribs! I haven't tried them in the slow cooker yet - or with cola! What a great idea. When's dinner? =P Slurp!

I love your writing... and I absolutely adore ribs! I am definitely going to try your way of doing them... Thanks