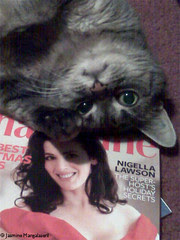 I was checking out email
When out the corner of my eye,
I saw a pretty little thing miaoing at me.
She said I never seen a gal,
Who looks so overworked,
Could you use a little small yummy?
In the office they'll suffice
Your kitchen it entice
Or you can sit here and give me no sway,
I said you're such a sweet young thing,
Did you think of this yourself?

She looked at me and this is what she said.
Oh, there ain't no rest for the wicked,
You need to stow their needs,
You got cakes to bake,
You got yeast to feed,
There ain't nothing that beats lychees.
I know you must whisk eggs,
I know your cookbook stack
Though I know there's somthin' you should,
Oh yes there ain't no post for the potluck,
And we need to bring something good.
--with apologies to Cage The Elephant 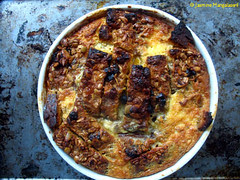 Okay...Hagia didn't exactly sing this...but when I looked over and saw her squirmy with glee over this month's Chatelaine Nigella feature, she reminded me that I've not yet been able to submit one post for the weekly Nigella event at I Heart Cooking Clubs (Yeah, Workasaurus and Deadlinadactyl take full credit). Add a tweet late last week from Mel of Bouchon for Two asking for pumpkinny baking and I knew I had a post that fit both bills.

My Dear Little Cardamummy handed me a 796ml tin of pumpkin purée for the Thanksgiving tarte, which left 550+ mls of purée in my hands. I made a granola-topped pumpkin loaf with some of it, cookies with the rest (yes, I realise I'm being mean and not giving you those recipes yet).

Unfortunately, and I don't know how I did this, I only ate two slices of the bread all week. Trust me, it was delicious, but I just didn't eat it. Even though it was a bit stale by the time I realised this, I knew it was more than salvageable.

This recipe is done in the spirit of Nigella's Grandmother's Ginger-Jam Bread and Butter Pudding. I don't spice the pudding as La Lawson did, as the pumpkin bread is quite flavourful from the spicing and a bit crunchy from the granola I baked onto it, but I did take a cue from the ginger jam and used orange marmalade. The result is a lovely, soft, eggy sweet and spicy pudding. Quite honestly, I think I'll make the bread again, just so I can make this pudding. 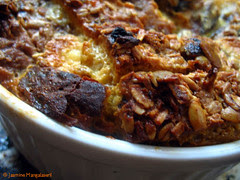 Butter a pudding dish large enough to hold the pudding and custard.

Make marmalade and butter sandwiches with the bread. Cut each sandwich in half to form triangles or squares, whichever you prefer. Arrange the little sandwiches in the buttered dish.

Whisk the eggs with the sugar and then add the milk and cream and mix well. Pour over the sandwiches. Strew whatever dried fruit or nut you wish on top of the pudding.

When your oven is to temp, pop the bread pudding in the oven for 45 -60 minutes, depending upon your kitchen gods' moods. The pudding is ready when the custard has set and is poofy.

I love how you made little sammies in the bread pudding!
Hagia, you are quite the poet, and flirt! Love the photo. xo

The bread pudding sounds fabulous!! Perfect for this time of year. I'd love to have a slice of this right now :D

I love bread & butter pudding, but I love variations on the traditional one even more. How delightfully seasonal this one is :D

I love how food endlessly recycles itself into more deliciousness (except in the case of my grandmother who, bless her heart, just blends all the leftovers into soup, with varying success). This sounds divine!

I am eager to give this a try. Good bread pudding is one of my favorite indulgences but I've never tried a pumpkin version. And cooking for one, I always have bread leftover when a do a zucchini or pumpkin loaf so what a great idea to use it up.

Oooh sounds yummy in my tummy. Thanx for filling the cancer lady's belly before her long trip around the world...:o)xxx

Nice fall dish...I love the addition of the raisins and dried fruit.

Wow!! This sounds super delicious!! Great cool-weather dish :) Thanks for bringing it to the Potluck.

A perfect fall dessert! (And a cute kitty too!). Thanks for joining in the potluck!