We'll return to our regularly scheduled programming in a bit 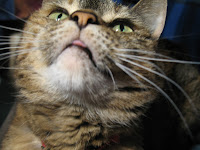 Apologies for the relative silence, but have been preoccupied with non-foodish worries. One of which is the passing of one of the exbf's kitties, Hillary (named after the mountain climber, not Ms Clinton).

We adopted her and her littermate Ophelia back when we were together, in 1994ish. Since then Hillary has barey left his side.

I'll be honest and say we didn't get along. She saw me as "the other woman" and I saw her as the creature who kept beating up my precious little Ophelia. But between her ninja-like attacks, the weirdest predicaments she got herself into (including running around with a watering can stuck on her head), even I'll admit that she was a special little thing. 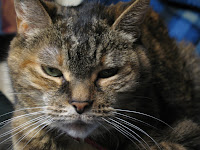 Her health hasn't been well for a few years--we suspect she was an early victim of the tainted pet food issue, as she lost the use of her kidneys. Much to everyone's surprise, she lived on 20 per cent kidney function for the past few years (yes, subcu fluids every night...which she hated). She was happy (happier now that I'm not in the picture) and purry. This week she essentially got thrush and she stopped eating. This combined with other things precipitated a quick decline. We lost her a couple of nights ago.

Will be back in a few days.

I suspect she is in kitty heaven, asserting her top-cat ness upon every being...and plotting something against me...like arial attacks from celestial book cases or digging little hidey holes from which to leap out and bite my toes...that's okay...I actually kinda liked it here on Earth.

Email ThisBlogThis!Share to TwitterShare to FacebookShare to Pinterest
Labels: Cats

Sorry about the cat. You alway give such vivid descriptions of the cats and make them so humanlike. It's cute. I hope all is well with you.

Thanks for the pictures, J!

Oh I'm sorry to hear that. How is Ophelia handling things?

Our pets are our family members, the heartache of one passing is real and deep.
My love to you and yours in this time, you are a most kind and generous lady to share both your sadness and your strength and even humour with us.
I look forward to your return,
Love,
Natashya
xo

Sorry to hear about the loss of your cat. We get so attached to the darn little beings...they are part of family life. We lost ours a few years ago, after 12 1/2 years with her,it was very difficult. My husband swore we weren't getting another pet, but lo and behold a few months later, we welcomed another one into the family. Keep well in 2009, from a fellow Canuck in Montreal.