If I say “fish fingers and custard” what pops into your mind?

No.  I’ve not joined some weird food blogging event sponsored by a multiconglomerate of processed “food” manufacturers daring participants to combine two unlikely products and pretend that they are fit for human consumption (individually or together).

No.  I’ve not accidentally typed “fish” when I meant “lady.”

No.  I’m not pregnant (but yes, I am still looking for a decent guy…in case anyone out there knows of one).

So what’s the big deal with Doctor Who?  Why has this TV series about a Time Lord and his companions hurtling through time and space in the TARDIS captivated so many worldwide? It’s not a big US “a big budget automatically makes it good” production--in fact, production values are traditionally low.  Really…have you seen a Dalek?  They look like overgrown pepperpots with a toilet plunger as one arm and a paint roller (or is it an elongated eggbeater) as the other, with a camera lens on a stick as an eye.  That's what they look like. In reality they're heartless, angry squid creatures who hide out in the pepperpot shells.

I think it works because when you strip away the sexy fish vampires, killer mannequins, battle-obsessed potato people, farting aliens, and cyborgs at its heart Doctor Who is about a drifter with a dark and mysterious past, who when he sees bad things happening, does something about it.  His friends and comrades are often recognizable to the average viewer—students, shopgirls, people just trying to get their act together—and together they get to the bottom of issues and generally make things better.

And for me…the cleverness of the baddie pretence is irresistible.  For 50 years writers have taken everyday items and made them terrifying: shop mannequins, stone angels, your neighbour's voice crying for help, your television set.  I've always known diet pills are evil.  As to The Doctor: he's eccentric. And he's smart.  How could I not be attracted to that?

Throughout the past half-century the Doctor has remained an enigma.  In as much as he’s an optimist, he reveals himself in bits and pieces.  Sometimes he references the Time War or other fights he’s been in.  Sometimes he talks about the people he’s lost. Sometimes his reactions tell the tale.  Whatever it is…there's a lot of darkness that he keeps at bay.

One of the things I find interesting is how fans interpret the words and deeds found within the canon.  Many have extrapolated life lessons, such as the ones I found that speak to PR and strategic communications. 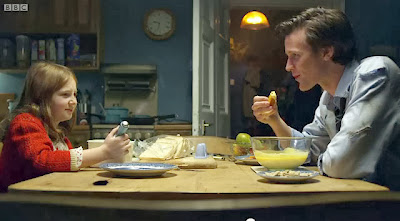 Okay fine.  But what does all this have to do with fish fingers and custard?

Well…the Doctor has a few food peculiarities.  Pears are bad.  Jammy Dodgers save the day.  He likes to offer people Jelly Babies.  Celery is a boutonnière.  And then there’s the entire banana thing.

Long story short, after regenerating into the 11th Incarnation, the doctor got hungry and after rejecting many foods, he was satisfied with fish fingers and custard.

I’m sure Stephen Moffat came up with that combination to see what Whovians would do with it. And yes, a number of people have created their own recipes, including Alton Brown, this sweet version using cookies.

So…a challenge.  And I’m up for it in honour of Doctor Who’s 50th Anniversary celebrations this weekend.

The fish part is a fairly easy non-recipe recipe: dust fish goujeons with seasoned flour, dip in an egg wash and then coat in panko crumbs mixed with herbs (such as parsley or dill).   You could also just go out and buy a packet of fish fingers…but where’s the fun in that?

As to the custard, I knew I didn’t want to play around with a savoury milk pudding spiked with saffron, turmeric or mustard.  So I took the easy route and zhuzhed up a homemade aioli.  No my custard (or TARDIS sauce) isn’t electric yellow, nor is it cooked, but it does have dairy and egg.  I will say, the sauce is also good with roast potatoes.

And well…what’s fish without chips? You could do fries or good, chunky chips…but given how battle-loving the potato-like Sontarans are, I decided to make some crispy, smashed Sontarans. Heat  enough oil so you can either deep fry or shallow fry the fish.

Dab off any wetness from the flesh, then dredge in the seasoned flour, dip in egg and then cover in the herbed panko crumbs.

Fry until the fingers are cooked.

Combine egg and garlic with mustard, salt and pepper.  Whisk in the oils in a steady stream.  Keep whisking until fully incorporated and then whisk hard for about a minute to make the mix thick and glossy.  Add the vinegar and whisk some more.  Balance flavours to taste.

Smashed Sontarans
Again, this is another non-recipe recipe.

Baby potatoes (about 5cm/2” in length) OR regular potatoes, cut  into 5cm/2”  chunks. Leave the skins on
Salted water (for boiling)
Olive oil
Salt and pepper
Other seasonings, you see fit.

Parboil the potatoes in the salted water.  Drain and tumble onto the oiled cookie sheet.

Press the down on the potatoes with a  spoon, fork or the bottom of a sauce pan.  You can smash flatish or just press down enough to rough up the surface.

Sprinkle with salt, pepper and other herbs and spices as you see fit.

Bake for 20-30 minutes until the potatoes are cooked, with crispy brown bits.