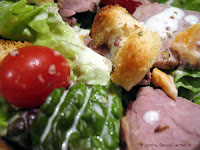 Found tucked amidst sales flyers and the colour comics, November's new Milk Calendar's arrival is a an anticipated bit of Canadiana, linking together potentially millions of families across the country. Think I'm kidding? More than 2 million were distributed in Saturday newspapers.
I remember being little, leafing through its pages from --the full-colour pictures represented "Canadian" food for me--not what I got a lot of as a youngster. My Dear Little Mummy (okay, she was My Dear Big Mummy then) rarely cooked from it. Apart from the occasional muffin or cake, the recipes went largely untried in our household.
So there it dangled on a bare nail, part art, part time keeper and reminder of bills to be paid and those already paid. Each month had a different meal or treat--everything from milkshakes and smoothies to pastas and, of course cakes and other sweets. Each beautifully photographed to entice the home cook to cook with milk and its kindred foods. At the end of the year, the calendar came down and was stored in the basement, with the other calendars.
Ashamedly, I continued Mummy's tradition of not cooking from it. Yes, I looked forward to receiving the calendar, flipping through the pages and salivating at some of the photos and recipes, but it never really crossed my mind to try the recipes. Inexplicable, really, given I'm pretty much willing to try any kitchen treat at least once.
When this year's calendar arrived, I decided to change that. Not because this year's recipes seem better than last (they don't), or because I've recently developed a hankering for dairy (that's been an ongoing craving ever since I was little, much to Mum's chagrin). I don't know what it was, but I decided this year the calendar to use as more than a record keeper of my household goings ons. So once a month...probably on a Monday, I'll post that month's recipe.
January's recipe for Roast Beef Dinner Salad is quick, satisfying, and different from the usual leftover meal. It's ludicrously simple: lettuce leaves strewn with waves of roast beef, crumbles of tangy old cheddar, juicy little tomatoes, crunchy croutons and fingers of cooked green beans, dressed in a creamy horseradish and thyme vinaigrette.
I'll probably come back to this, but change it up a bit--add sauteed mushrooms and onions and switch the horseradish and cheddar for blue cheese.
Simple, delicious and easily adaptable, this is definitely worth a try.
cheers!
jasmine

I received mine this year through a magazine subscription, and it is hanging on the kitchen bulletin board, covered in writing already.

What a lovely idea, Jasmine! I think that recipes from the Milk Board, or Egg Board, or other trade groups, are often overlooked simply because of the source. But there are hidden gems in calendars, on boxes, and on web sites. Looking forward to more Milk Mondays.

I got a kick out of your tribute to this "Canadiana!" (We hang one up if nobody gives us a more exciting calendar for Christmas. Nobody did, so there it is.)

This calender or recipes sounds so cute and fun . I'm glad your looking through them . There might be some really simple yet very tasty recipes.

I must not be truly canadian - I have never heard of this before! Maybe it's an eastern Canada thing?

What a neat idea......wish we had those calendars here!!! So, seeing as we dont, I will happily tune in to read your posts from each month. Thanks Jasmine xx

It has been ages since I have made anything from the Milk Calendar - even though it always hangs in our kitchen and like quellia's, this year's calendar is already covered in writing.

Good for you for deciding to make the recipes!

Good for you! I too have fond memories of the Milk calendar and NOT cooking from it ... here's to a year of changing that.

Beautiful way to start the new year Jasmine! I like the horseradish and cheddar dressing but then I like the blue cheese too.
Seems a lot of folks read but don't cook those recipes.

The milk calender is hanging on the wall of my dark kitchen, and is hanging on the bright and sunny walls of my mother's and grandmother's kitchens and has been everyday of my life. Definitely a staple in Canadian homes. Do I cook from it? Generally no. My Grandma and I made the carrot cake from the back of this year's, I don't recommend it.

Quellia -- Thanks for the reminder that it's also availabe in some magazines. One of my colleagues gets a mini one with one of his subs...I'd love to get a small one for my cube wall.

Lydia -- Yup. I must admit I don't have an issue with trade-board or farmer's recipes, but I tend to snub recipes that are to promote a particular brand or brand-name item.

Mama Squirrel -- Thanks for the link!

Glamah16 --yup, nothing to strenuous and most of the ingredients are easily found in larger centres/towns.

Katerina, CollyWolly -- I noticed that the calendars were distributed in some of the Southam/TorStar papers (as well as some mags). You can order one in through your provincial Dairy Producers' Assoc. Here's the addy: 2008 Milk Calendar Orders.

Brilynn -- Hmm. Haven't tried that recipe yet...wonder what will happen if I try it...

I still make a version of the broccoli soup that was on the calendar years ago. But in the past few years, most of the recipes and photos have not really appealed to either of us. (I must say that I do get a kick out of looking at the "for the adventurous" section at the bottom of the recipe. I'm amazed at what is sometimes considered to be "adventurous")