A plum of a pudding 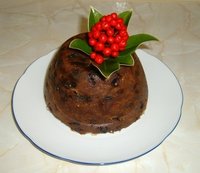 Today we had our departmental Christmas lunch. Given we were at one of those ubiquitous hotel chains, the food wasn’t entirely inedible and some of it was actually quite good.

What surprised me and one of the guys at my table was the dessert table had plum pudding. Not fruit cake, but plum pudding—complete with sauce…too bad it wasn’t flaming. I haven't had any in years--ever since I started making a sticky toffee pudding for the Jollyday supper a few years ago.

Anyway, this made me think back to something I wrote a couple of years ago. Actually, this was my first attempt at food writing…and given I’m embroiled in my final assignment of the year and trying to get my cookie baking done, I thought I’d just revisit said article instead of coming up with something new and Christmassy…

Separating food from December is, I think, nearly impossible and frankly, not a task I’m willing to do. From canapés to cakes, food is integral to how we celebrate. But which food best represents the holiday season, and more specifically, Christmas? We nibble shortbreads year-round, turkey with all its trimmings is shared with Thanksgiving and the much-maligned fruitcake is a traditional wedding cake.

The answer came in a flash—well, not a flash exactly...more like a flaming cannonball, perfumed with nutmeg and cinnamon, textured with currants and sultanas and thoroughly soused in brandy. It was, of course, the venerable Christmas plum pudding.

Testy terminology
Puddings, according to my go-to book on all things foodish, are both a sweet course and a boiled or steamed flour and egg dish. And before you ask, those powdered packets flavoured with artificial or simulated chocolate, vanilla, pistachio etc. are a form of milk pudding, falling into the custard family of foods—perhaps more on that at a later time…And as for “plum” it was an olde-time term for fruits (currants, raisins, apples and whatever else) added to the pudding.

A bit of history
Today’s Christmas puds descended from Mediæval British pottages: savoury soup-like courses served early during a meal. They had bits of red meat, onions and root vegetables, herbs, spices and wine and were thickened with breadcrumbs. Trading routes allowed the additions of dried fruits such as raisins, prunes, currants and sultanas along with Eastern spices such as cinnamon and nutmeg. Over time, red meat was switched for white and was eventually lost all together, although suet used in modern recipes serve as reminders of the pudding’s beginnings. Root veg—save the odd carrot—also disappeared.

Originally eaten during Church feast days, pottages eventually became associated solely with Christmas. At one point they were outlawed because Cromwell and his lot thought the ceremonial flaming and the dish itself was highly decadent and too reminiscent of Britain’s pagan past; George I re-legalised it in 1714.

In truth, the Victorians should be thanked for really resuscitating the Christmas pudding: they were cheaper and simpler to make than cakes and accessible by nearly everyone (only the wealthy had ovens, but most people could boil or steam food). Today’s version changed little since the 19th century: suet, brown sugar, sultanas, currants, candied peel, crumbs, eggs, spices and alcohol steamed in either a pudding basin or bag, set alight and then served with a boozy sauce.

Preparing the pud
Plum puddings need to be cured, so a bit of advance preparation is needed. Here’s where recipes, cooks and mums tend to differ: curing can take anywhere from a few weeks to a year. Traditionally “Stir Up Sunday”—the 25th Sunday after Trinity—was a reminder to prep the pud.

Personally, I’ve not the time to assemble a proper pudding, and more importantly, I lack the willpower to let that luscious treat cure for even the minimum time (for those of you who do, here’s a link to Delia Smith’s Traditional Christmas Pudding recipe. She has other variants, so I really suggest you explore her site and try her recipes—I’ve never had any of her recipes fail).

Store-bought puddings, although convenient, do need a bit of spiritual guidance, usually in the form of brandy or rum (or if you’re my mum, Bailey’s Irish Cream—don’t ask). It’s important to remember that although the pudding is cooked, you will need to steam it again before serving. No, a zap in the microwave does not count (well, maybe if you want to heat leftovers for a midnight snack or breakfast…but only then). It’s also excellent served warm with ice-cold, really, really good vanilla ice cream—I’m sure purists are clucking at me, but I don’t apologize for putting ice cream on anything.